It’s amazing what people will believe with a bit of clever marketing, coercion, lies and censorship!

Are you looking forward to a well-deserved drink after a hard week?

Can I let you in on a secret…?

But I’ve decided that, for the following reasons, I’m NOT going to do that:

1. I enjoy a whisky by the fire in the evening on colder nights.

2. After a hard slog in the garden or DIY’ing at the weekend, there’s nothing better than a cold beer.

3. I can manage my weight without having to sacrifice any of the above.

4. Based on my studies, I am confident that being a ‘healthy weight’ will be better for me, than being overweight but tee-total.

5. I believe the relaxing qualities of a drink in the evening are GOOD FOR ME.

-Do I drink every night? NO.

-Do I exceed ‘guidelines’ some days? Probably.

The point being, I don’t worry too much about it.

Serious question. Do you think a prescription of no socialising, no dancing, no singing or no alcohol is ‘good for our health’?

Full disclosure. I’m stereo-typically Scottish and like a beer or two at the weekend. I’m also a whisky fan, particularly on dark winter evenings by the fire. But I’ve learned enough about nutrition to be satisfied that a limited amount of alcohol is absolutely nothing to be worried about from a health or weight loss perspective.

Did you know that alcohol may date back to 7,000 to 6,600 B.C. and is enjoyed by chimpanzees, our closest living relatives?

With’ Social Health’ being an essential cornerstone of our wellbeing and survival, it’s easy to see why booze has been with us such a long time.

Of course, too much alcohol has negative effects on your health, but that’s a different subject altogether. For most people, the health benefits of losing weight will surpass any health improvement seen by simply avoiding alcohol while remaining overweight.

So let’s move on to the main discussion points.

But, It’s called a ‘beer belly’ for a reason?

Although alcohol is fairly calorific, most of us don’t tend to drink whisky or vodka ‘neat’ in large volumes (even in Scotland :).

Daily and multiple pints of lager will ruin your calorie deficit, to be clear…

But for many people, it’s not the ‘booze calories’ that are the problem. It’s that any additional calories can’t be ‘burned’ until we’ve metabolised the alcohol.

So unless you’re in a calorie surplus over seven days or so, it really won’t make any significant difference to your fat-loss results one way or the other.

Put another way, if we’re already in a calorie deficit, any calories that DO get stored as fat will be utilised over the following hours and days after we stop processing alcohol.

Our bodies are very good at managing our energy. Just like any normal/typical non-drinking day, those energy’ peaks and troughs’ are managed through glucose and fat storage to allow quick access to energy when needed.

“Dispelling the Myth that Alcohol Turns into Fat”

Beer Not Burgers – as the lads used to say

Unless you have a beer ‘habit’ or drink half-pints of Baileys (I once knew that guy), it’s less about the alcohol calories and more about our susceptibility to temptation.

Alcohol is well known to increase food intake. We all know someone who likes to indulge with crisps or a cheeseboard after they’ve had a drink.

Studies have shown that a couple of drinks can result in an additional 26-30% calories. Bright people in white coats believe this is because alcohol enhances the reward value of food. How else could you feasibly enjoy a doner kebab on a street corner?

But my weight goes up on a Monday.

Let’s not confuse the Monday’ weight gain’ with ‘fat-gain’ either. There’s a reason our weight often goes up on a Monday and drops again around Wednesday.

If you recently put on a few pounds after that Tier 20 house-party, likely, only a minuscule part of this is fat-gain.

We tend to eat higher carb/sodium foods at parties and at the weekends generally, both of which leads to increased water weight. Our bodies also overcompensate following a weekend of alcohol-induced dehydration. Then there’s that delayed intestinal ‘food in transit’ 🙂

It can all add up to a couple of kilos come Monday, but unless you were drinking crates of cheap lager or ate 13 Big Mac Meals (on top of what you usually eat) at the weekend – it’s mostly temporary and NOT fat gain for the most part.

Research has shown that alcohol increases fat storage only when you take in more calories than you burn off.

In one German study, the ‘alcohol group’ actually lost slightly more weight than a grape juice group so you can indeed drink alcohol and still lose weight, just as long as you’re sensible about it.

Strategies for having a drink without giving up on your weight loss efforts.

If you want to know how to justify (in the name of losing weight and getting healthier) spending a small fortune on your next bottle of Whisky/Gin/Rum, then read on for all the ammunition you need! No doubt you will raise some eyebrows at the same time 🙂

To be clear, I recommend you stick to fewer drinks OR switch to lower-calorie drinks in the first instance.

If you’re only going to have 1-2 drinks, just go for it! And don’t stress or even bother with any of the following tips.

However, if you would historically have, say up to 5 drinks, I recommend the following:

I don’t know about you, but when I’m sipping an 18-year-old malt, it tends to last longer:) So instead of guzzling gallons of your usual tipple, think about increasing your enjoyment with LESS booze:

-Select one or two of your favourite real ales instead of 3+ pints of cheap lager.

-Pick one or two glasses of your favourite malt whisky, rum or gin instead of cheap blended whisky and coke. Make it a proper treat and savour each sip with a smile on your face.

-Enjoy one or two glasses of your favourite wine instead of a full bottle of cheaper wine.

Don’t drown before you get drunk.

Still, most beers contain a fair amount of calories from carbohydrates, and if it’s a big night out (or in) with the lads, those carb calories can fairly add up.

So instead of filling up on largely non-alcoholic calories, like cheap fizzy lager, doesn’t it make sense to skip the bloated belly and instead sip a favourite malt whisky or speciality gin while keeping yourself in a calorie deficit; perhaps using those ‘banked calories’ for something else?

Yes, we are indeed really talking about the most calorie efficient way to get tipsy! Although some spirits have substantially more calories than your typical beer, nearly every calorie comes from alcohol in some spirits.

-Choose a diet style mixer such as slimline tonic or sparkling water, which will help fill up your stomach and keep you hydrated with zero calories.

-Switch out wine for something less calorific, like a spirit you enjoy.

Plan ahead – then get back on plan.

Because your weight loss success is determined by the average of ‘energy balance’ over the whole week, this gives you an opportunity to think pre-party and post-party.

So if you know that tomorrow evening you’re going for a few drinks, how’s about reducing calories today to make room for 2-3 drinks tomorrow? Skip on that fruit juice, avocado or usual peanut butter, and you’ve made room for another drink or two.

Similarly, modify your calories the day or two after the party, and the scales will reward you for it.

Are you trying to build muscle?

Alcohol can interfere with our ability to grow muscle (or improve at any sport) by displacing macronutrients and micronutrients that would otherwise help us recover between exercise sessions. Getting a good nights rest is also important for recovery when resistance training, so take stock of sleep duration and quality if trying to optimise results.

To give you a real world example, many of my clients aim for around 0.5 -0.75 Kilograms of weight loss per week, which gives us a targeted DAILY deficit of 550kcal on the low end. This small to medium-sized deficit makes weight loss goals easier to hit, but it comes with a built-in problem! It doesn’t take many misdemeanours or slip-ups to fall back off the wagon.

Yes, 3 large wines or beers a day would easily put you back in a surplus.

Also, even if you were to go easier on the booze and only erode that deficit by 50% with less calorific options/quantities as previously, this still leaves you hardly any room for error elsewhere in your day. Lick the peanut butter from your knife, and you quite possibly, won’t be in a calorie deficit any longer:)

The biggest issue with booze is what happens when the drinking stops.

Because if you binge drink and follow up with a large pizza, you’re most likely going to gain weight.

So my recommendation is to avoid after drink snacking.

An alternative option would be to consume one of your emergency protein bars which most of my clients have to hand for just such occasions. In fact, any high protein, lowish calorie snack would be a good option.

Just a couple of strong beers can mess with your sleep and decision making powers the following day, as we tend to make poorer food choices when we’re sleep-deprived.

If you still have the willpower to follow through on habits and keep below your maintenance calories for the week, it may not be a dealbreaker.

We all know the less booze, the better.

Drinking less is something we should all aspire to, particularly if we want to OPTIMISE for fat-loss/fitness/strength/muscle and other aspects of ‘health’ that may become more of a priority as life ticks past.

Just remember that if you have an alcohol habit of sorts, it won’t just make you less healthy; it will make it extremely difficult to lose weight without becoming nutrient deficient at the same time. Picture a stereotypical alcoholic, and you get the idea.

The Magic is in the Middle.

Like many things in life what’s right for you might not be right for someone else. Just be mindful and honest with yourself about how consumption is affecting your ability to get results elsewhere in life.

All that said, if you’re sticking to low-calorie alcohol and drinking in moderation, it should have little to no impact on your rate of fat loss if you make calorie adjustments elsewhere. Have less than 5 drinks at a time and limit to a couple of times a week, and you’ll get all the positive effects of alcohol, with hardly any of the downside.

There you go. ‘Health’ is about finding balance in your life. Enjoying a few drinks and switching ‘state’ or kicking back with friends can be a positive thing if you know when enough is enough.

So I hope this information gives you the comfort to enjoy alcohol while continuing to make positive progress. I also hope it has freed you from the belief that alcohol will sabotage your fat-loss goals.

So next time someone says “alcohol turns to fat”, tell them it’s ‘fake news’ & that ‘the science has been settled’, it’s been FACT CHECKED, and send them here 🙂

p.s. “scientific consensus” is an oxymoron – the science is NEVER settled, but don’t tell the them that 🙂

For more no nonsense information on how to get back in shape under your own steam be sure to check out the free ebook! 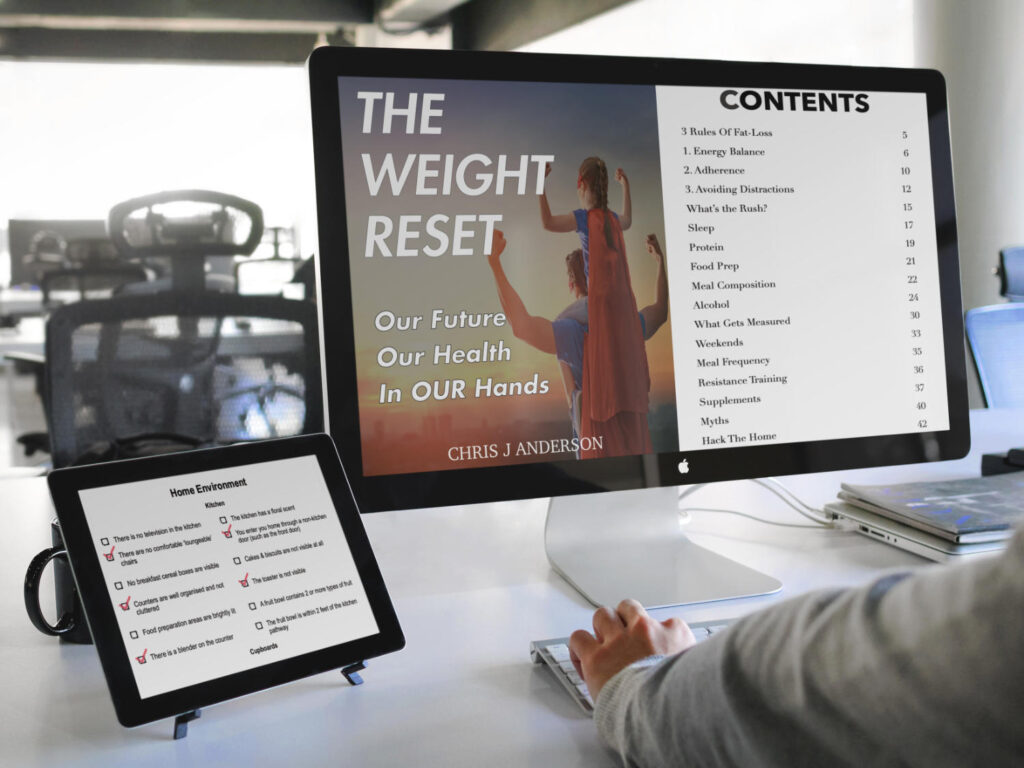